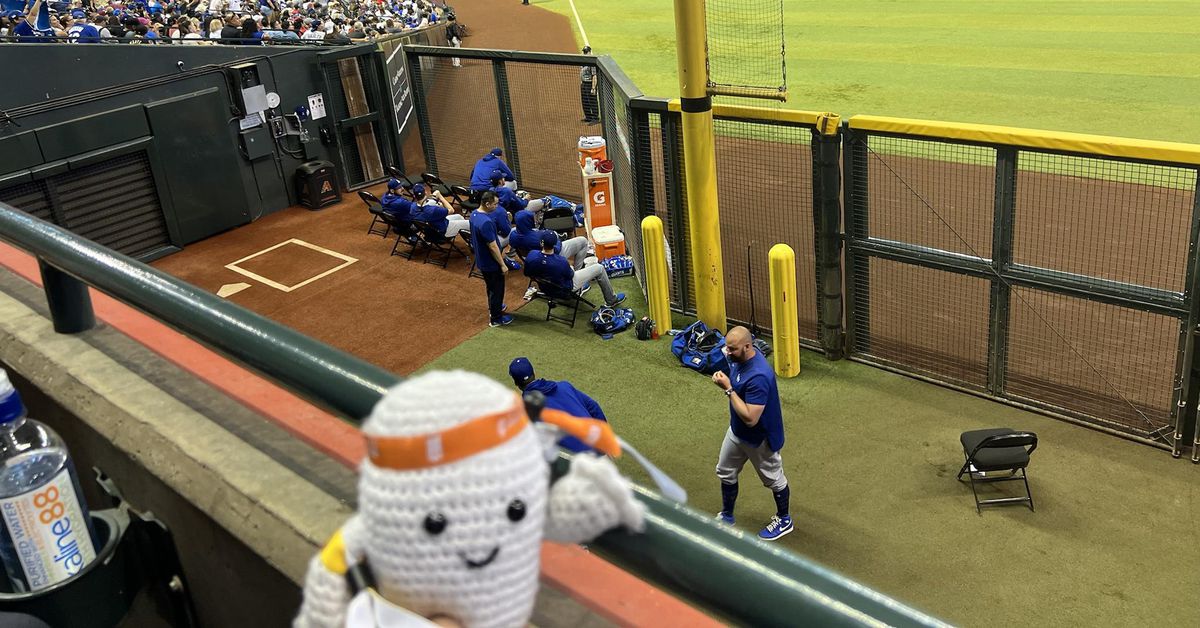 So you have decided to answer the call of adventure. Good for you. If you need to refer to what the Guide really is or who I really am, please refer to the links included.

The guide has the following to say about going to a game at Chase Field:

This place is a testimony to the pride of man. /sounds of melting.

Fair warning, if you go to Phoenix you are going to be in the desert and chances are it will be hot. You will only have two saving graces: 1) it will be dry heat, so drinking water and staying in the shade will be more effective than if you were in humid heat; and 2) if it’s hot outside, chances are Chase Field’s roof is closed and it’s cozy inside.

Going to Chase Field solves the Angkor Wat problem for Dodger fans. What’s wrong with Angkor Wat, you ask. As you may or may not know, I spent six months in 2016 working and living in Phnom Penh, Cambodia, while working in the Extraordinary Chambers of the Cambodian Courts, i.e. cases of war crimes. There are three things people do when they go to Cambodia:

Contrary to popular belief, there are are other temples to visit in Cambodia. Most people make a classic mistake: they visit Angkor Wat first, then get overwhelmed by all the other temples they could visit. How does this issue relate to the Dodgers, you might ask. Thanks to The Guide, I’ve been a strong advocate for visiting PNC Park in Pittsburgh and Busch Stadium in St. Louis, because they’re great stadiums. But if you visit them first, all other stadiums are disappointing in comparison. Chase Field solves this problem as shown below.

Here’s everything you need to know to attend a Dodgers/Diamondbacks game at Chase Field.

Yes, but you really don’t need to go there more than once for a weekend streak – unless you live nearby.

Chase Field is fine. Although brief, this description is the most appropriate to describe a game in Phoenix. Now, I would admittedly be disappointed if Chase Field was my ballpark, as the park could use a little TLC and some upgrading of amenities and features. However, if you visit during a Dodgers series, the stadium will be packed and bustling and feel like a home game. It’s a weird thing when the home team gets booed during player introductions, but here we are. After talking to locals, being outnumbered at home is a reality for Phoenix devotees.

Therefore, for this reason, Chase Field serves as a great introduction to Dodgers baseball travel. This statement is especially true if you’re someone who doesn’t travel much but has been inspired to venture out to see the Dodgers in person outside of your usual routine. Although Chase Field is outclassed by other baseball fields, it serves as the de facto Dodger Stadium East, allowing a Dodger fan to experience a home away from home, if going to see a game. Dodgers/Diamondbacks.

For the first time at Chase Field, you can go to customer service and they will give you a postcard-sized cardboard certificate that you can fill out yourself to mark the occasion. If you buy your tickets directly from the team, you can pay extra for a fancy sized paper ticket with your specific seat information.

I normally fly to Phoenix, but on occasion I have been part of the ten hour drive from Central California to Phoenix. I wouldn’t repeat it. While traveling around Phoenix other than by automobile is generally not recommended, if you follow the advice in this guide, you should be able to get to and from the ballpark from your accommodation.

Some hotels offer free shuttles to the game, and carpooling tends to be hit or miss depending on traffic around the ballpark. With this ballpark, in particular, the best advice I have is that if you’re not driving yourself, you better get to the ballpark early. At worst, you can catch batting practice.

As you can see, you have a bunch of hotel options near Chase Field. Now if you want to rent a car I would suggest just finding somewhere that has the best deal because at that point the selection of hotels becomes a purse. If you want to give up a car, I’ve circled two options for you. I have previously stayed at the Hilton Garden Inn (2021) and SpringHill Suites (2022).

The Garden Inn is a nicer hotel, and it’s right in the middle of downtown, so if you wanted to mingle/socialize/do other things after the football game. Also, for people with reduced mobility like myself, it is easier to get to the Garden Inn from Chase Field, as there are more landmarks to use for navigation. SpringHill is less expensive but has an hourly shuttle that will drop you off at Chase Field if you tell the front desk that you want to go to Chase Field. Supposedly, you can also arrange transportation to the hotel with this shuttle, but if you turn around when leaving Chase Field, it’s just easier to walk back to the hotel. However, SpringHill is the worse of the two hotels and nothing major. Needless to say, if you go the wrong direction, you’ll wander off a bit. Walking back to either hotel is much easier at night, even in the heat. I wouldn’t walk into any of the hotels outside of the snapshot, especially in the heat.

Sitting at Chase Field is also a simpler experience than at other ballparks. Since Chase Field is usually crowded with other Dodger fans, unless you’re incredibly introverted, you’ll probably have fun interacting with others at the ballpark. The general rule is to avoid the upper deck at Chase Field – you don’t have to sit that high if you want to watch a game at Chase.

Plus, prices at Chase are generally reasonable to the point where you can sit anywhere on the ground floor, with the only limiting factor being your budget. So instead of making the usual budget, fun, and value categories, this Guide entry is going to split the seats into the following two categories.

As you can see, you have a lot of options. Do you want to be able to order food and have it delivered? Then sit in the Club seats just above pitch level. The food itself is good, if unremarkable. The place could lean a little more on its southwestern flavor profile, but that’s a personal taste note.

If you want an unobstructed view of the game, sit at field level. The most expensive seats are the seats closest to home plate or dugouts. But if you immediately sit down in the sections behind what i just described, the prices are pretty reasonable and the view you get is pretty good for what you pay.

No matter where you choose, if you follow the Guide’s advice, you’ll have a great view of the game and are likely to be surrounded by Dodgers fans.

There’s also a bar in the Club Seating area, but the general rule is that in the seats I’ve identified, you’re usually too far from the action to actually watch the game, other than on a monitor.

Certainly, you can see different aspects of the game that you couldn’t see watching the game at home. But even if you get up to eat something, you’ll probably get the best results at Chase Field sitting with a group if you choose to sit in the identified seats.

5. After your trip, is it worth going back?

I’ve been to three games at Chase Field in 2021 and 2022. The Dodgers have won every time. Don’t take my recommendation as evidence that Chase Field provides a poor experience for a Dodgers fan. It’s not – at all. As the analogy goes, going to a game at Chase Field is like hanging out in the shallow end of a swimming pool when you can’t swim. Sometimes all you need is a quick dip in the pool to cool off or halfway to hit the road to watch the Dodgers. Unless you have another reason to be in Phoenix, going to Chase Field for a weekend series is probably enough for most Dodgers fans in their lifetime. But if you want to go more often, you’ll probably have a great time, but there are better places to visit repeatedly.

The best time to sell your travel agency may be now: Travel Weekly