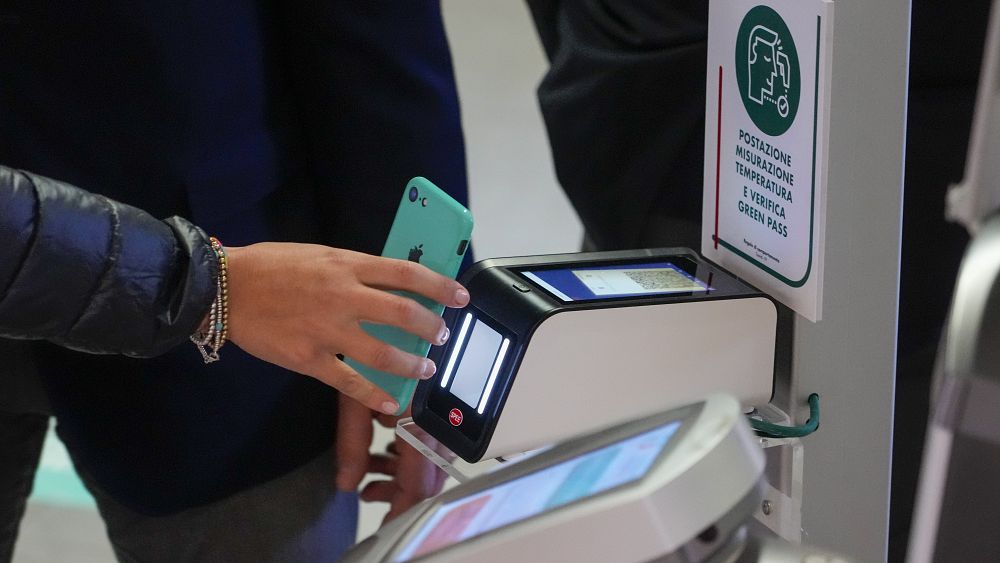 Brussels said the EU’s COVID pass – used for cross-border travel – will expire nine months after the last dose of the vaccine.

A reminder will be necessary to extend the validity of the certificate.

In a travel recommendation unveiled Thursday afternoon, the European Commission updated the rules for the COVID pass – which has been in place since the start of the summer – to take into account the coronavirus outbreak and the deployment of booster injections.

Under the proposed amendment, the COVID pass – known as the EU’s digital COVID certificate – will only be valid for travel through the block for nine months after the last dose of the so-called “primary series” vaccine: one dose for the Johnson & Johnson jab and two doses for the Pfizer-BioNTech, Moderna and AstraZeneca vaccines.

Newly released data from the European Center for Disease Prevention and Control (ECDC) shows that vaccine protection declines after the first six months and recommended have a booster to extend immunity beyond this period.

The European Commission says the additional three months on top of the six will give EU countries more flexibility in their vaccination campaigns. Health policy is a national competence and each country is developing its own vaccine deployment. The purchase of the photographs is however centralized by the EU via joint purchasing agreements.

The executive is now evaluating how long the recall will remain valid.

Apart from proof of vaccination, the certificate can also be obtained with a negative coronavirus test taken within the last 72 hours or a declaration of medical recovery.

The fundamental rules of the system will remain intact: Pass holders have the right to be exempt from travel restrictions, such as testing and quarantine, regardless of which EU country they come from.

Citizens who do not have the certificate will be allowed to travel but may be subject to additional requirements before or after arrival.

Children over 12 years old will have to follow the same rules as adults.

“It is obvious that the pandemic is not yet over,” said Didier Reynders, the European Commissioner for Justice. “Travel rules must take this volatile situation into account.”

The recommendation is to be adopted by the 27 EU countries, some of which have publicly urged the executive to adapt the rules and make way for booster injections.

Reynders is hoping the updated framework will be in place by early January.

The commissioner also said the EU was leaving behind its country-by-country approach to the pandemic and now focused on a person-based strategy, which will combine the number of new infections, vaccination rate and testing to determine rates. high and low. risk areas.

“This takes into account [the fact that] vaccinated people are better protected against the virus, even if it is not completely, ”said Reynders.

To date, over 76% of the EU’s adult population is fully vaccinated, although significant differences between Member States remain entrenched, especially in Eastern Europe.

The EU’s digital pass went into effect on July 1 for an initial period of 12 months, with the expectation that the pandemic will be over by next summer. Brussels considers the program a success: more than 650 million certificates have been issued to date and 51 countries, including the United Kingdom, Norway, Switzerland and Singapore, are connected to the system.

Nevertheless, the divergent deployment booster shots across the block is about to confuse citizens. Along with the European certificate, most Member States have introduced the use of green passes to allow entry into indoor spaces such as bars, restaurants and cinemas.

Even if the national and European certificates are connected to the same IT infrastructure, the rules of use differ in practice. The EU system only applies to cross-border travel and does not influence how a government can use its health card within its territory.

The new recommendation comes the same day because the European Medicines Agency (EMA) has authorized the use of the Pfizer vaccine in children aged 5 to 11 years.