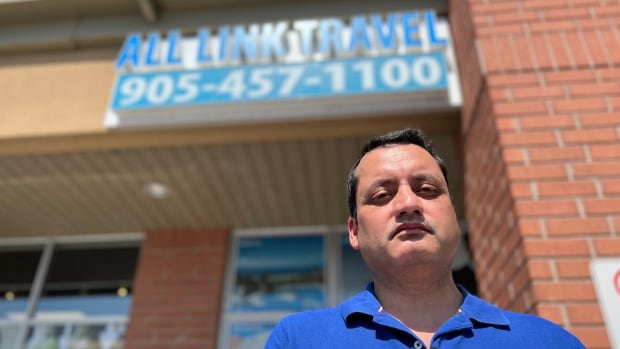 How This Man Fought Over $5,200 After A Travel Company Spent His Airplane Vouchers — On Other Clients

Surinderpal Gill trusted the travel agency where he bought tickets for a family trip to India two years ago.

But then he was left with over $5,200 and his confidence was shattered.

Last June, Air Canada sent Toronto-based All Link Travel three vouchers to compensate Gill for the return flights that were canceled as aviation came to a halt amid the pandemic.

But instead of telling him, Gill says the travel company repeatedly said there was no sign of the valuable travel documents. He then used these vouchers to pay trips for other people.

“I feel like I’ve been betrayed,” he told Go Public, shaking his head in disbelief from his home in Brampton, Ont. “How can someone use my money without my consent? »

Gill is one of thousands of Canadians who have fought for months to get travel vouchers issued amid the pandemic. Many say the very travel agencies they’ve used are compounding their problems getting vouchers or refunds from the airlines.

“The bane of our existence…the infamous travel voucher,” said Richard Smart, CEO and Registrar of the Travel Industry Council of Ontario (TICO), which regulates travel agencies. “Complaints have skyrocketed over the past two and a half years.”

The Canadian Transportation Agency (CTA) says it has also received thousands of such complaints – nearly 9,000 since the pandemic was officially declared in March 2020.

Gill, his wife, two sons and five other family members were in India in March and were desperate to return to Toronto after their return flights were cancelled.

He paid nearly $11,000 for four tickets to board his immediate family on a federally arranged flight; almost triple the usual cost.

Surinderpal Gill was angered by his travel agency‘s use of his travel vouchers for other customers and is suggesting another way to administer airline refunds.

“There were no more options,” he said. “We had no choice.”

When Air Canada received a bailout from the government in April 2021 and promised to compensate travelers whose flights had been canceled, Gill waited a few months, then called his travel company to find out when his vouchers would arrive.

“They said they had no information,” Gill said.

He says he called several times over the next few months and each time was told that Air Canada had not emailed him any vouchers.

Last December, Gill asked Air Canada directly. He was told that All Link had the vouchers since June.

The airline sent her the same email she had sent to All Link, which included a PIN, to log in and check the balance. It was then that Gill learned that the vouchers – worth $5,277 – had been almost completely used up.

“I was angry,” he said. “It’s a misappropriation of money.”

The agency claimed the vouchers were used by mistake – three times.

Gill says the Air Canada representative confirmed that the vouchers were used to buy plane tickets for people with entirely different last names.

Vouchers can be used for other customers, TICO’s Smart said, but only “if the original customer gives permission.”

Richard Smart, CEO of the Travel Industry Council of Ontario, explains how the regulator imposes charges.

All Link Travel declined an interview request. Instead, a representative – who did not give his name and called Go Public using a blocked phone number – repeatedly promised to send a statement, but never did.

Gill says he’s grateful to have his money back, but it’s been an exhausting experience.

“Everything went well,” he said. “At the same time, I still feel like it shouldn’t have happened.”

Gill says it’s problematic for airlines to send vouchers to customers’ travel agencies. Since the emails include a reservation code and a PIN, agencies can use the vouchers.

“The travel agency did not pay for my ticket, so why is the money [voucher] back to them?” he said.

Gill’s isn’t the usual type of voucher complaint TICO has received during the pandemic, Smart says.

He says the regulator has been inundated with complaints about the time it takes travel agents to provide air travel vouchers, the hours customers spend on the phone dealing with agencies and airlines, and a desire for cash instead of travel credit.

They replace commissions that agencies lose when flights are canceled, he says, and typically range from $75 to more than $200 per ticket.

“Welcome to the world of unregulated fillers,” Gradek said. “[The fees are] a trade agreement that is in place between airlines and travel agencies. And travel agencies are free to charge whatever they want.”

One said he was “absolutely lost” when it came to getting vouchers. Another wrote that “after four hours they disconnected my call”. Another said his agency “refused to refund” money that was rightfully his. Yet another claimed his travel company was holding nearly $3,000 “hostage.”

“Don’t procrastinate,” he said. “Always follow whoever got the last ping pong – whether it’s the travel agency or the airline. The more angry you get with either party, the sooner you’ll settle this matter. “

Failing that, says Gradek, they can escalate into provincial or territorial authority that handles travel complaints.

But Ontario’s regulator, TICO, cannot force an agency to reimburse a client.

“They have a nice loud roar…but when it comes to doing something that will put money behind their actions, they seem very reluctant to want to do it.”

Smart says TICO isn’t “heavy” but does a lot in making it easier for frustrated customers to talk to travel agencies. When mediation does not work, its agents can lay charges and take cases to court.

“We can’t impose a settlement,” Smart said. “But we’ve recovered hundreds of thousands, millions of dollars over the years for consumers who filed complaints.”

Gill, who filed a complaint with TICO, agrees he should have more power.

“Why do they get [government] money if they can’t do anything to compensate the consumer?” he asked.

“You have to give them the power to do it [agencies] reimburse the consumer so we don’t have to go through lengthy court cases.”

Still, Gill says he and his family are still eager to travel – next on the list is Western Canada.

“We have a lot of family in the Vancouver area,” Gill said. “This is our dream vacation.”

Gill says he will use his newly issued refund to make this trip, but wonders how many other Canadians still owe vouchers from their travel agents.

“I want to raise awareness of this issue,” he said. “There may be more victims of which [vouchers] were used by travel agencies without their knowledge.”

WATCH | The man fires back after the travel agency spent his vouchers on other customers:

Man fights over $5,200 after travel agency spends airline vouchers on other customers | Go in public

A Brampton, Ont., man owed more than $5,200 in airline vouchers after his flights were canceled at the start of the pandemic. Instead, her travel agency used them to pay for other people’s trips.

Go Public is an investigative news segment on CBC television, radio and the web.

We tell your stories, shed light on wrongdoing and hold powers to account.

If you have a public interest story, or are an insider with information, contact [email protected] with your name, contact information and a brief summary. All emails are confidential until you choose to make them public.