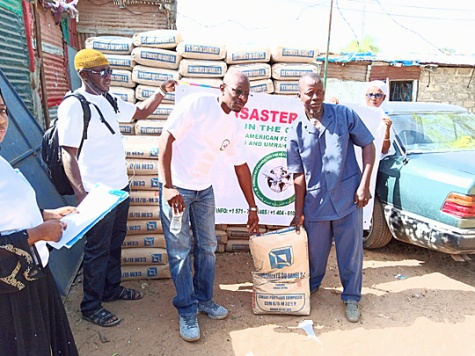 Among them are 19 families from Brikama and 12 others from all over the country. Three families each received two packages of corrugated iron sheets, while the others each received 10 bags of cement. An additional packet of cement has been allocated to two schools and a mosque in the West Coast region to help repair their damage.

Mr. Sheriff Kijera, the group’s national coordinator, said 270 bags of cement and 16 packs of corrugated iron are currently being distributed across the country. “It is part of the group’s social responsibility to vulnerable members of Gambian society who are struggling to recover from the damage caused by the storms in the rainy season,” he said.

Although the group was registered in The Gambia in 2020, its entry into the Hajj and Umrah market is primarily driven by humanitarian services rather than profit. “The founders annually pool their resources to meet the travel and accommodation needs of pilgrims in Saudi Arabia. They also help with the preparation of food and supplies to help needy pilgrims who find it difficult to avail of these services. in Saudi Arabia, ”Kijera explained.

Based in the United States, the group has responded to appeals from families and people in need whose homes have been swamped by torrential rains or whose buildings have fallen and roofs washed away. Victims were identified through an evidence-based assessment and packages were mobilized through the group’s fundraising to support those identified as being in need here in The Gambia.