It is a road trip that has changed the lives of many people. Passing through two 5000m and two 4900m high passes with breathtaking views, the Manali-Leh road was constructed as an alternative to the Srinagar-Leh road. It remains a mecca for bikers and a delight for adventurers.
Route details

The 474 km long highway starts at Manali and is normally open from 01 June and officially closes on 15 September every year; in practice, it remains drivable until the end of October (“official” means the Indian government won’t airlift you if you’re trapped in the snow).

From the cozy devdar forests of Manali at 1900m it meanders to the scrabble of dhabas at Marhi with magnificent views of the valley below. You will pass the huge water passage called Rani Nallah on your left. The stony road bends back to the first of the passes. Although it is by no means a high altitude pass, Rohtang Pass at 3978m is a dreaded spot, as its very name translates to “a pile of corpses”, in reference to travelers who perished trying to cross it. The weather can change abruptly at Rohtang Pass and visibility can become poor when clouds cover the landscape. The highway is prone to freak landslides which can make it entirely muddy and muddy, creating sporadic traffic jams. The road quickly turns ugly and descends into Lahaul to the bottom of the Chandra valley and arrives at the checkpoint in the city of Khoksar (passports of foreigners are checked here and entries for Indians are also made in the register) .

Khoksar is a favorite stop for truckers as the quality of food at dhabas is perhaps the best on the entire Manali-Leh highway. The pretty Lahauli towns of Sissu with a famous waterfall and Gondhla with a huge tower are left behind. The road is at a comfortable altitude, as it reaches Tandi which is the confluence point of the Chandra and Bhaga rivers, which begin their journey at Baralacha La. It is also famous as the last place to have a gas station; the next is about 350 km at Karu-Upshi, 50 km before Leh.

The most popular place for a night stopover comes next – Keylong – it is the seat of Lahaul District (in Lahaul-Spiti District) and is a big city by Himalayan standards. Government-run buses from Manali break off their two-day journey to Leh at Keylong. It is also the place where you will get a sense of the Buddhist connection to Leh. There are many restaurants lined up on the road offering Tibetan dishes. At around 3300m, it’s a recommended place to relax and acclimatise before the rigors of the next day’s huge ascent on the second highest road in the world. 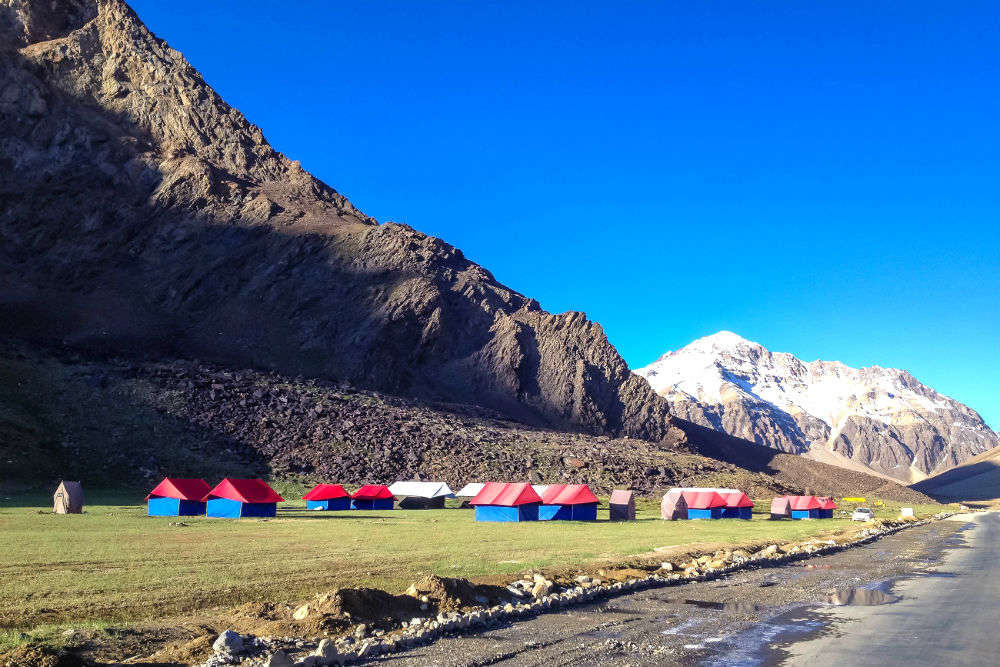 Another alternative to staying in Keylong could be the fairytale village of Gemur or Jispa which is just 25km away at the same altitude. These places are located along the banks of the Chandra River and are likely to be more attractive to nature lovers. After passing through the last major dhaba town of Darcha, which is 28 km from Keylong, the road begins its long ascent and for the next 250 km do not descend below 4000 m. Acute mountain sickness (AMS) can be a serious problem if you are not properly acclimatized, so caution is advised. The road and the route of the trek to Zanskar diverge at Darcha; the road leaves the river behind and climbs to the desolate military camp of Patseo and then to ZingZingBar (what a funny name!) which is a group of 3 dhabas at the base of Baralacha La. The majestic waters of Suraj Taal (taal , in English translates as lake) pass by the right before reaching the magnificent triangular pass of Baralacha La at 4890 m.

Baralacha La (the translates as pass in Tibetan) can also be called the gateway to Ladakh, Spiti, Lahaul and Zanskar – all four regions are only a day’s walk from the top of the pass, which is usually covered in snow until as late as July. As you begin the descent from Baralacha La, the colorful temporary city of Bharatpur is visible in the distance. A sign with the amusing name of Killing Sarai breaks the reverie before the road approaches the border of Himachal Pradesh and Jammu and Kashmir at Sarchu. At 4200m, Sarchu is set on grassy ground and has an array of multicolored tent camps. There is also a police checkpoint and a wine shop in Sarchu.

The road enters Jammu and Kashmir and this stretch is a feast for the eyes with two photogenic valleys featuring Cappadocian style erosion formations. The ‘highway’ then meanders along 21 switchbacks known as the Gata Loops to climb up to the spectacular Nakee La (4915m). It’s a real desert when a sign saying “Whisky Nallah” passes. Just when you think the road can’t climb any higher, Lachung La (5035m) approaches. 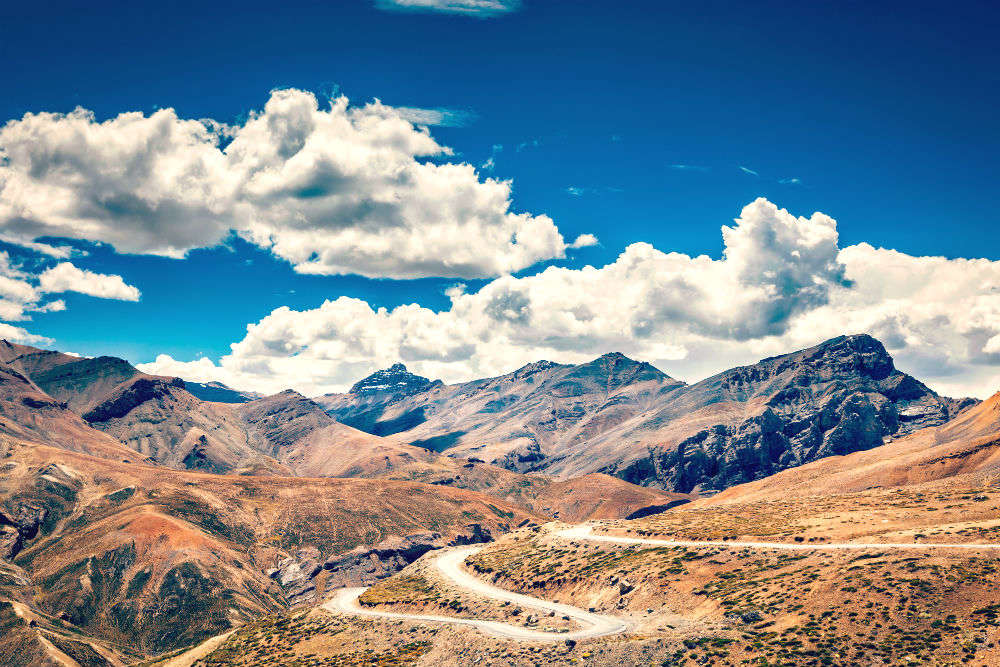 The descent to Pang is quite spectacular, especially the last 5 kilometers as the road passes through a series of dramatic gorges. Another military camp in a totally desolate environment is approaching, and at 4630 m, it is hard to believe that there are parachute cafes! This incredible stretch is not yet complete and will take you into the beautiful Morey Plains, relatively flat terrain for 40 odd kilometers at (hold your breath) 4800m nestled among rounded peaked mountains. Morey Plains is home to the Tibetan wild ass (kiang), wild horses, hares and marmots and is an extension of the famous Changthang Plateau, extending into Tibet.

Even as you and the vehicle struggle to breathe, the highest point of the Manali-Leh road approaches – the windswept pass of Taglang La at 5359m (supposedly, this is the second highest pass of the world). Clear visibility means one can see sights from long distances even with the naked eye. Finally, the road begins to descend and the first village, Rumtse, comes into view; around 4200 m, it’s a treat for sore eyes. Usually there are green and yellow fields to welcome you to this first permanent Buddhist settlement in Ladakh on the Manali-Leh road.

The road descends towards the spectacular Indus Valley, following the Indus River and arrives at the important villages of Upshi and Karu (about 3600 m) among poplars and ancient monasteries. We are in sight of Leh as Choglamsar passes, a delicately colored front door proclaims ‘Jullay, Welcome to Ladakh’, as we come from the modern outskirts towards haberdasheries, wrinkled lamas and apricot vendors tricksters from the main bazaar in Leh. 1. Manali – There are a few guesthouses and hotels in Gulaba, Palchan and Marhi before Rohtang pass. Food is plentiful on the tourist trail from Rohtang to Marhi dhabas.

2. Khoksar – This is a recommended pit stop for tasty food at the chain of dhabas either side of the checkpoint. A basic bed in parachute tents or cafes is available for INR 100-150 in Khoksar, Darcha, Bharatpur, Sarchu and Pang.

4. It is also possible to find space to stay in one of the three basic ZingZingBar dhabas. Bharatpur has eight or ten huge parachute cafes with communal sleeping areas (INR 100-150 per person). 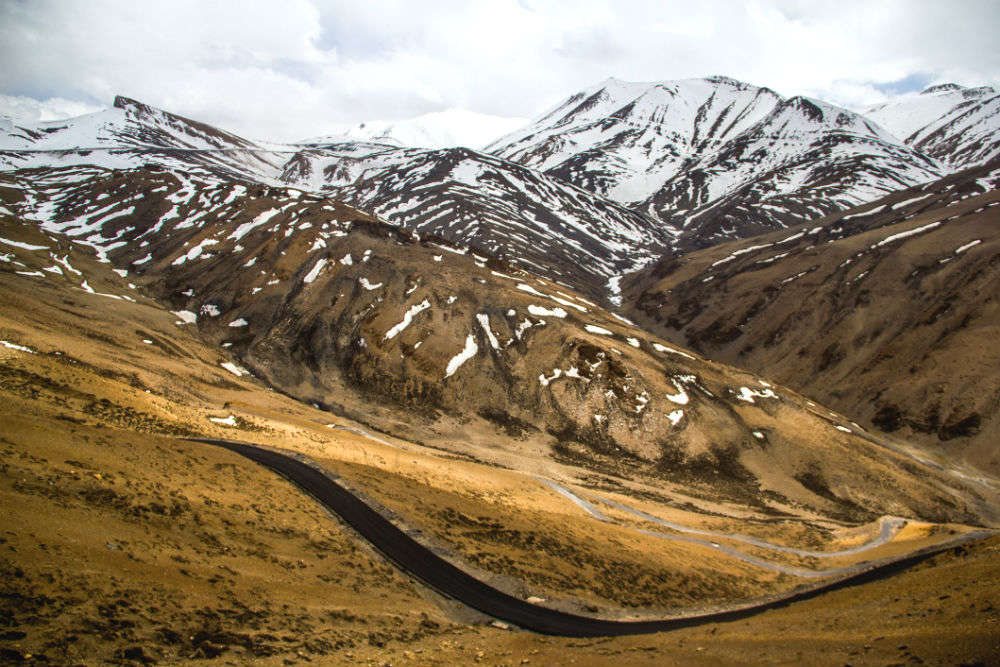 5. A variety of accommodation options are available in Sarchu, ranging from cheap Swiss tents to luxury tents.

6. Pang also offers plenty of accommodation options in the form of basic tents.

7. There is a strong possibility of finding a homestay in the village of Rumtse; there are also some basic guesthouses in Upshi and Karu.

Basic bedding and blankets are provided in the common areas of the dhabas or parachute cafes. 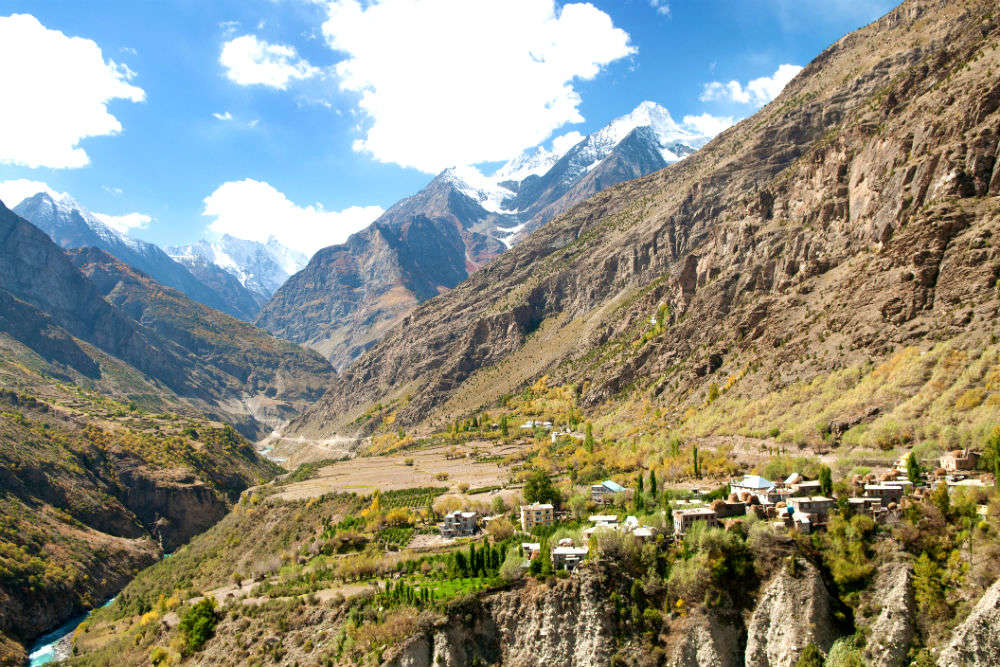 Exact times can be checked on http://hptdc.gov.in/leh.htm (a one-way ticket costs INR 700 and the tourist bus costs INR 2400 which includes the stay in Keylong with dinner and breakfast).

You can break off the trip at Keylong, acclimatize and then continue to Leh to enjoy the views along the way.

2. Shared taxis and minibuses run between Manali and Leh charging commuters per seat; some run with an overnight stop in either Keylong or Sarchu.

Some shared taxis do what is known as the cannonball run to Leh (an 18-hour nonstop journey), leaving at 2 a.m. from Manali and reaching Leh by night; it’s not recommended because you miss all the scenery. The cost per seat is around INR 1500-2000.

Personal taxis and SUVs can be hired from Manali for drop off in Leh, and cost around INR 18,000. Things to keep in mind

1. Cell Phone Networks – BSNL and Airtel are better. The cellular network generally works well until Keylong and Jispa, then directly to Upshi.

2. MAM (dizziness, headache accompanied by nausea) can be fatal at these altitudes. Acclimate slowly and don’t rush until you feel better. Drink plenty of water and stay hydrated. Locals recommend smelling camphor and drinking water mixed with wild garlic. The only known treatment for people with AMS comes down fast.

3. Remember that the last gas station is at Tandi and the next one is about 350 km away at Upshi-Karu. So, fill the canisters if you drive your own vehicle. 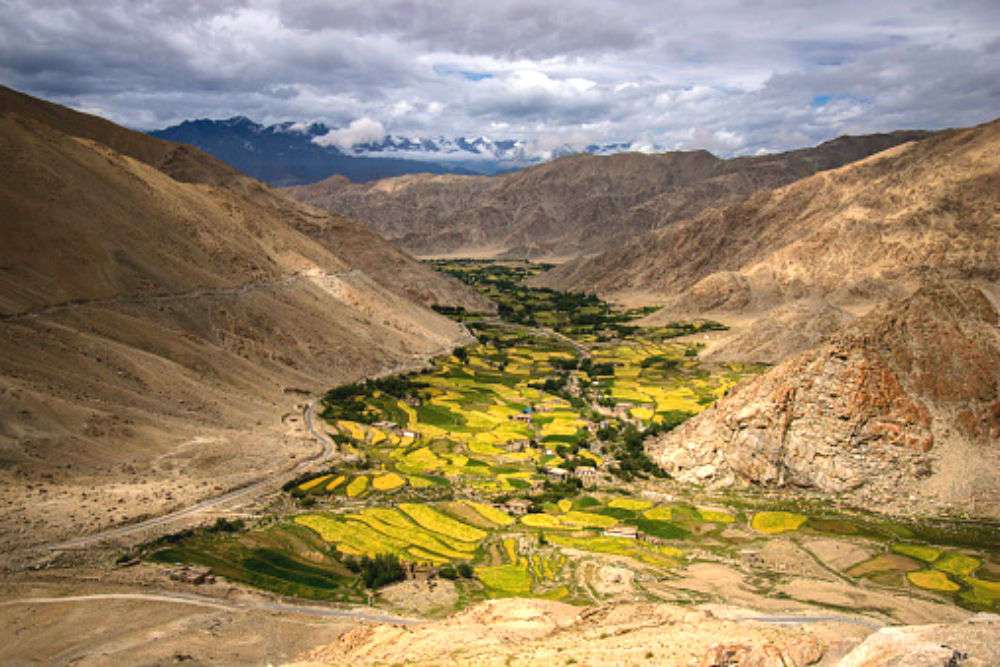 4. Sunlight can be very harsh at these altitudes; don’t forget to generously apply sunscreen and lip balms. Don’t forget to use sunglasses. Weather is likely to change suddenly at high passes, sometimes dropping from 35 degrees Celsius to 0 degrees Celsius in minutes; prepare accordingly.

5. It is advisable to cover your ears from strong winds and keep enough winter clothes ready for a change of weather. Dressing in layers is the classic mantra on a Manali-Leh road trip. Also remember to bring waterproof clothing.

6. Mechanical and spare parts workshops are few and far between; Keylong is the best bet when repairs are in progress. A fierce camaraderie reigns on the Manali-Leh road; in case you get stuck anywhere, vehicles on both sides are likely to help you out.