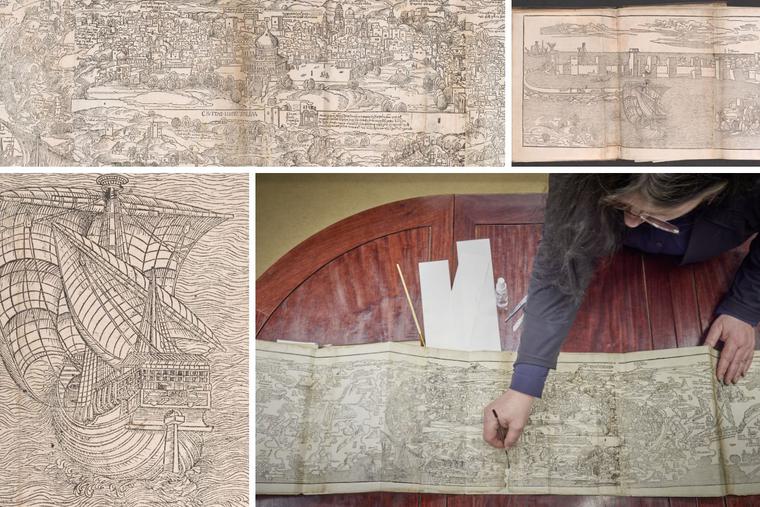 Through an online campaign, the library of the Catholic University of Louvain in Belgium will fund the restoration of the 15th century “Peregrinatio in Terram Sanctam”.

It is considered the first illustrated travel guide in history and one of the first accurate depictions of the land of Christ a few decades after the invention of the printing press. Journey to Terram Sanctam (A Pilgrimage to the Holy Land), a rare 15th century book, will soon be restored as part of the “Adopt a Book” program, a crowdfunding campaign launched by the library of the Catholic University of Louvain.

The work recounts a pilgrimage to Jerusalem and Mount Sinai undertaken by the German pastor and diplomat Bernhard von Breydenbach between 1483 and 1484. Breydenbach’s text is illustrated by one of his traveling companions, the Dutch artist and engraver Erhard Reuwich.

The travelogue was first published in Latin and German in 1486 and was so successful that it was reprinted several times in the following years and translated into several languages.

“The journey from Europe to the Holy Land was traced and illustrated; the cityscapes, the people and the language were represented by and for the pilgrim,” Griet Dobbelaere, fundraising manager for the restoration project, told the Register.

From Venice to Cairo

The journey started in Rödelheim, Germany. The travelers then reached Venice and sailed via Corfu, Modon and Rhodes to Jaffa. After visiting Jerusalem and Bethlehem, they crossed the Sinai Desert to Saint Catherine’s Monastery and returned via Cairo and Alexandria. The journey ended in February 1484 in the German city of Mainz, where the printing press was invented by Johannes Gutenberg some 30 years earlier.

Panoramic views of Venice, Parenzo, Corfu, Methoni, Heraklion, Rhodes and Jerusalem have been faithfully reproduced in the book, which also contains a representation of the Church of the Holy Sepulchre, as well as plates with figures of Saracens, Jews , Greeks, Syrians, Abyssinians and Turks, and tables with letters from the Arabic, Hebrew, Syrian, Coptic, Ethiopian, Armenian and Greek alphabets.

Giulia Bartrum, Curator of German Prints at the British Museum, noted that most depictions of places such as Jerusalem were inaccurate before this book was published. “Very few people in Europe had ever visited these places, so they had no realistic idea of ​​what they looked like until this wonderfully detailed guide was published,” she said.

The 500-year-old book also contains chapters on the various religious doctrines of the time, indications of distances between places on the road from Venice to Jaffa, a detailed schedule of pilgrimages to the Holy Land and Mount Sinai, and advice and remedies. protect travelers from the risks of traveling to unknown lands.

The animal drawings, present in the first version of the work, are not present in the copy of Leuven, that is to say the Latin edition of Peter Drach, printed in 1490 in the German city of Speyer.

“Journey to Terram Sanctam is considered a key work in book printing before 1500,” Dobbelaere told the Register. “The University of Louvain is really lucky to have a copy of this remarkable treasure which is unfortunately in poor condition today.”

Reverse the passage of time

The precious incunabula belongs to the collection of the Maurits Sabbe Library, the research and heritage library of the Faculty of Theology and Religious Studies in Leuven.

According to its experts, the poor condition of the work is the result of the ravages of time, as well as a previous unsuccessful restoration attempt in the 19th century. They estimate the total cost of the restoration work at around 8,000 euros (8,200 US$), explaining on the site that the conservation work will be carried out in the university’s Book Heritage Lab under the direction of Lieve Watteeuw.

Dobbelaere said: “We are still seeking funds to help us finance the restoration and save this work so that many generations to come can be touched by a well-preserved heritage that is tangible witness to a fascinating past.

The project, which has been the subject of a video presentation, is open to contributors worldwide through the “Adopt-a-Book” crowdfunding campaign, a program launched by the university to ensure the preservation, management and enhancement of its precious heritage collection. Once the work is complete, the guide will be fully digitized and made available to the public.

Less than sunny: the challenges of the ABQ travel agency are constantly evolving