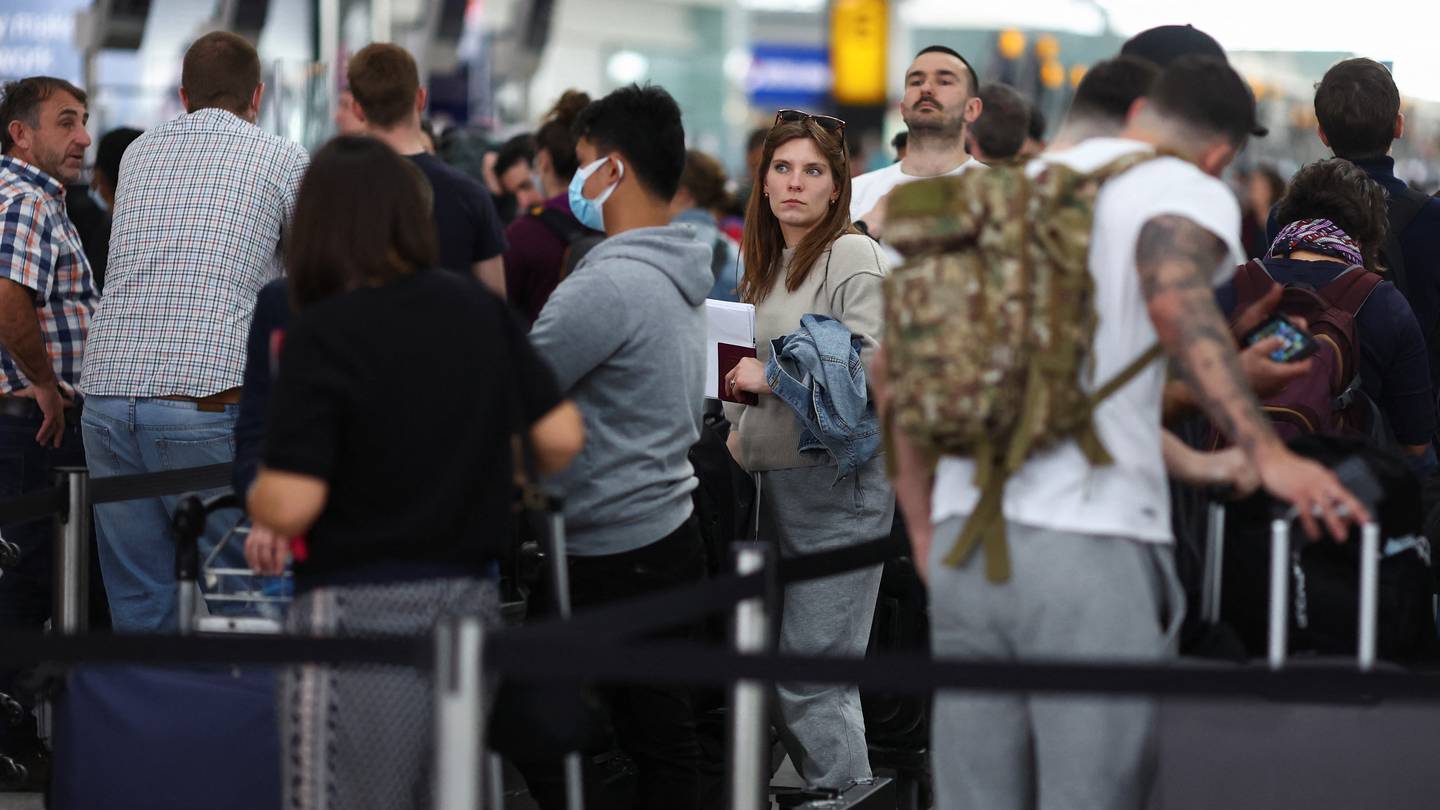 Travelers faced more delays on Thursday as experts warned tomorrow would be the busiest day of the year for airport and road travel.

Passengers at Manchester and Birmingham airports shared pictures on social media of lines stretching away from check-in counters, with one saying the situation was “completely chaotic”.

Large numbers of people had to wait at Tui check-in counters at Manchester Airport, with other customers recounting a 90-minute wait for luggage.

“We can confirm that, unfortunately, due to the lack of staff at Manchester Airport today, some customers are experiencing longer than usual wait times at check-in,” the company said.

“Rest assured that our teams are working as fast as they can.”

Good Friday is likely to be the busiest day of Easter, with 2,430 flights from the UK and more than 9,000 over the bank holiday weekend.

Motoring organisation, the RAC, estimates Good Friday will be the busiest day on UK roads for at least eight years.

He predicted that 21.5 million leisure trips will be made by car between Good Friday and Easter Monday.

Motorists are warned to set off before 9 a.m. to avoid being stuck in hours of traffic jams.

The worst areas of congestion expected are the M6 ​​north between Junction 26 and Junction 36, the M25 clockwise from Junction 8 to Junction 16 and the A303 near Stonehenge.

Airports have already suffered more than a week of chaos with staff shortages resulting in long delays.

Passengers have been advised to arrive three hours before flights to ensure they can clear security checks in time.

Queues at Manchester Airport on Thursday morning. Bosses at Heathrow and Manchester airports are preparing for a nightmarish weekend as staff shortages risk hampering what is expected to be the busiest day of the year in the travel industry yet . Photo: Richard James

“It’s going to be our busiest weekend in years,” he said.

“We have been inundated with calls and reservations and are fully booked. We have warned our customers to expect delays at the airport and advised them to travel earlier, and that we will collect them sooner.

“A lot of people are taking advantage of the lifting of Covid restrictions and this weekend it looks like business is getting back to pre-pandemic levels.”

As of Thursday, London’s Heathrow Airport, one of the busiest in the world, continued to prepare passengers for the possibility of delays in the transition to the airport.

“Wait times have been longer as passenger numbers have increased,” he tweeted.

“We don’t have information on how long it takes to get through security, as it can change on a daily basis. While wait times have been slightly longer as passenger numbers increase, we want to assure you that all teams are working diligently to efficiently assist passengers and keep waits to a minimum.

Hi Mags. We cannot estimate lineups or provide specific updates as they are subject to frequent fluctuations throughout the day, influenced by a range of factors. Rest assured that our teams continue to work diligently to effectively assist all passengers.

More than 20,000 people have suffered flight cancellations due to airline staffing shortages.

On Thursday, British Airways and easyJet were forced to cancel more than 80 flights at Heathrow and Gatwick.

Airlines blame staff illness and recruitment problems, with new employees having to wait up to 15 weeks to pass government security checks.

Rail passengers have also been warned of delays over Easter as Network Rail plans to carry out 530 engineering projects, which will close routes.

It is set to spell chaos for thousands of fans wishing to travel from the North West of England to Wembley Stadium in London for Manchester City’s FA Cup semi-final with Liverpool FC on Saturday.

Liverpool manager Jurgen Klopp has previously criticized the decision not to move the clash to the north of the country due to transport issues.

London’s Euston Station, Manchester Piccadilly and Liverpool Lime Street have all tweeted that fans should not travel by train.

On Thursday, those at London St Pancras said there were long queues for services to Europe.

A passenger bound for France said he waited over an hour due to a lack of staff.

A West Ham fan heading into his side’s Europa League second leg against Lyon has said there was ‘carnage’ at the station.

To compound the problems, this weekend the London Underground network will also see its services suspended for emergency works.

“We are currently inspecting the entire Metropolitan line fleet and will have more certainty on the impact for the weekend in the coming days,” a TfL representative said.

“We are working with the FA on any potential impact on event day services. Travel advice will be given ahead of matches, but customers should check before traveling and consider alternative routes.

Large queues of lorries have also formed on the roads approaching the Port of Dover as ferry services are also disrupted.

“All of our polls suggest Good Friday will be the busiest getaway day for Easter travel and vacation,” said Edmund King, president of the AA Automotive Company.

“If some drivers can leave Thursday or early Saturday, they may miss some traffic jams.”

The motoring organization has also estimated that with higher fuel prices, a 500 mile round trip will see drivers pay £20 ($26) more at the pump than last Easter.

Transport Minister Robert Courts said his department was ‘working closely with operators to minimize disruption’ during the break, but advised people to ‘plan ahead and check for updates on operators”.

Tulum travel guide: where to stay, what to do and where to eat