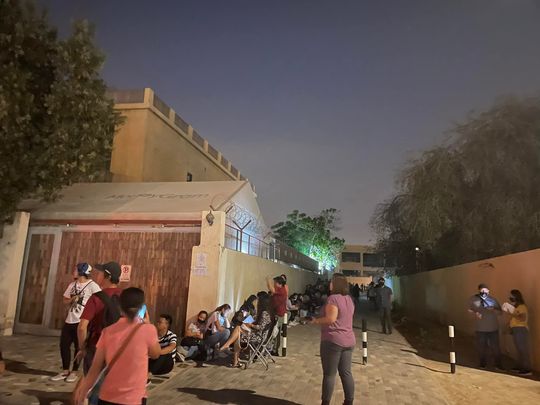 Dubai: Despite not being able to get an appointment online, UAE-based Filipino expats Mark and Phillip (names changed upon request) braved the summer heat and made their way to the Philippine Overseas Labor Office (POLO) in Dubai to have their employment contracts verified and acquire an Overseas Worker Certificate (OEC) – a mandatory travel document for Overseas Filipino Workers (OFW).

They were unlucky as the “strictly by appointment only” transaction is enforced by POLO Dubai. Mark and Phillip have already booked their tickets to visit their respective families in the Philippines later this month.

According to a notice from POLO Dubai: “All applicants (Contract Verification, Foreign Workers Social Administration/Balik Manggagawa-OEC Membership, Social Security System, Home Development Mutual Fund/Pag-ibig Membership) are required to present a confirmed appointment to be allowed entry (to POLO Dubai), except for OFWs with confirmed flights the next day.

“In this case and on presentation of complete documentary requirements, they are granted to the contract verification services. If confirmed flights fall on weekends and/or public holidays, they will be picked up on the nearest working day,” he added.

“The contracts verified by POLO and CABs are not required when they return home to the Philippines,” POLO Dubai noted, adding, “These (documents) are required when the OFW returns to their jobsite (in this case, the bucket)”.

For Mark and Phillip, the problem was that they couldn’t get an appointment before their flight. Both have not seen their families for two years.

Mark and Phillip’s case is not isolated. In April, POLO Dubai experienced an “unprecedented number of customers for more than a week”, leading to long queues of Filipinos seeking to verify their employment contracts.

Filipino expatriates then took to social media to express their “exasperation at having to wait long hours”. They also shared photos of people queuing outside the POLO office at Al Qusais 3 (next to the Consulate General of the Philippines) as early as 4 a.m. to get an OEC.

Gulf News previously reported the sentiments of Filipinos who expressed their anger through social media posts. Rein Angelo Ramoz called for the abolition of the OEC. His compatriot, Renzi, posted a message on the Gulf News Facebook page addressed to POLO-Dubai, saying, “Please don’t let the Filipino people suffer (because of) the OEC verification and labor contract. I don’t think waiting in a long line under the sun for more than 12 hours is justifiable. Please be considerate. I saw them waiting patiently outside. I don’t think they deserve this.

There are no longer long queues at POLO Dubai, following the introduction of a strict appointment system, but for Mark and Phillip and other OFWs, getting an appointment online is a big challenge.

Verification of the employment contract is a prerequisite for the issuance of a CAB. Under the Philippine Overseas Employment Administration (POEA) directive, all OFWs (Filipino Overseas Workers) are required to possess an OEC to return to their overseas jobs. The OEC, also known as the exit clearance/pass, is a document certifying the regularity of an OFW’s recruitment and documentation and proof of their registration with the POEA.

The OEC is presented to the immigration officer at the airport of exit in the Philippines. An OFW CSB holder may enjoy the following privileges: travel tax waiver, terminal fee waiver, and travel tax reduction for spouse or dependents.

An OFW exiting the Philippines without an OEC may be prevented by the immigration officer from leaving the country.

Philippine Labor Attaché John Rio Aceveda Bautista reiterated that the OEC is mandated by law. “The system is maintained by the POEA and its disposal is a political issue that only management can resolve.”

“As long as it (OEC) is required under POEA regulations, we will implement it,” noted Bautista, adding, “Removal of OEC only for UAE or a country is not tenable as it is required for all destination countries, which is why we strongly encourage them to go through the legal route.

Bautista pointed out, “OEC is the exit clearance, recognized by immigration officials for OFWs to leave the Philippines. The OEC also exempts the OFW from terminal fees and travel tax. Issuance of the CAB is mandated by POEA rules and considered valid until declared unconstitutional by a court.

Filipino expat Rica Turay pleaded, “Please remove this requirement from the OEC. This OEC gave us a lot of stress. We just want to go home to see our family.

Filipino vlogger and social media influencer Ion Gonzaga told Gulf News: “The OEC presented [people with] more frustrations than benefits. He said: “Our work visa in the UAE should be enough to validate our employment. We need proper support rather than just a “certificate”.

Gonzaga also criticized the “poor appointment system,” adding, “The website is poorly designed; online booking is poor; data verification is inaccurate. POLO-Dubai does not even accept cards or digital payments.

Gonzaga continued, “Philippine travel tax at the airport is around Dh115. In fact, we pay more for OEC and contract verification. They cost Dh92 and Dh40 respectively, plus you add the money spent on going to POLO-Dubai and the time wasted processing the request – it’s very inconvenient and more expensive.

“There is no empirical evidence that the act of verifying contracts performed by the POEA can justify restricting the traveler’s fundamental rights. Freedom of movement is a constitutional right, which a citizen cannot be deprived of without due process and only for clear and compelling reasons of national security, public health and public safety,” said Barney Almazar, director of the enterprise department -commercial. Gulf law.

“The requirement to obtain an Exit Pass or OEC is essentially a violation of a Filipino’s right to travel,” he added.

Almazar is also pushing for the removal of the OEC. He explained, “There is a need to balance the government’s duty to protect its people with the citizens’ right to travel and seek jobs abroad. Human trafficking is not prevented by a simple act of automatic approval of an employment contract. Criminals are not stupid to provide a contract that they know will be rejected. The government should crack down on illegal recruiters and not punish those who simply want to work abroad for their families.

He added, “The best way is to offer support to OFWs and channel resources to agencies based in host countries, rather than spending on unnecessary paperwork and bureaucracy.”

Way to go: Why Germany’s €9 travel pass is a big step in the right direction | Melissa Bruntlett and Chris Bruntlett